It was precisely regulated who received how much wine and in the what quality. This was also the case in Lübeck, as can be seen from the records of the Lübeck town council wine cellar master around 1504. Accordingly, a king should receive four ohms (each ohm equal to 145 litres) and on the following day another 16 Stübchen of wine, a queen two and a half ohms and the following day eight Stübchen, an elector twelve Stübchen, an elector six, a duke eight Stübchen, a duchess four, a bishop or a count four little Stübchen, a countess two, a knight or an abbot two little Stübchen, city councillors one little Stübchen, but if they came alone two, a doctor or chancellor two little Stübchen, but if they came with their masters only one little Stübchen and a council clerk a little Stübchen wine received. The Kampen example cited at the beginning shows that Lübeck adhered to these guidelines for wine of honour. Three delegates arrived from Kampen, the two mayors Lubbert van Hatten and Johan Kruse as well as the town clerk Johan van Breda, who together received three small rooms of wine.

After the arrival of the Hanseatic delegations in Lübeck, the question now arises: When did a Hanse Convention begin? Although the delegates were invited to Lübeck on a fixed date, the duration of the journey and the imponderables lurking along the way meant that only the approximate arrival could be planned. Therefore, a Hanseatic Day began when the majority of the expected Hanseatic cities had arrived in Lübeck. There was also a delay in 1518 and so the Goslar delegation, for example, still had a good week until the beginning of the Hansa Convention, which they spent on a trip to Travemünde to visit the ship “Eiserner Heinrich” lying there in the feeder and to see seals. In Lübeck, the Wasserkunst known at that time far above the city was admired and some errands were done.

Besides felt coats for mayor and city secretary shoes were bought and repairs on saddle and bridle of the horses were made. The Riga legation to the 1511 Hansa Convention also had to bridge a waiting period, which was also used for a detour to Travemünde in addition to the renewal of travel equipment and proviant. The interest was recently aroused by ships captured by the Lübeckers in the course of the Danish-Lübeck feud (1509-1512), which were now anchored there.

Invitations had been issued in 1518 for the 6th of June, but the Hansa Convention was opened with a delay of almost two weeks on the 19th of June. The Lübeck Council sent a herald to the delegates’ accommodations and invited them for the next morning to begin the negotiations. One could think of the town hall, because there on the first floor, in the Hansa hall, Hansa days were usually held. The Hansaal was built in the middle of the 14th century during a conversion of the Lübeck Town Hall, which led to a clear separation of duties and functions of the rooms. 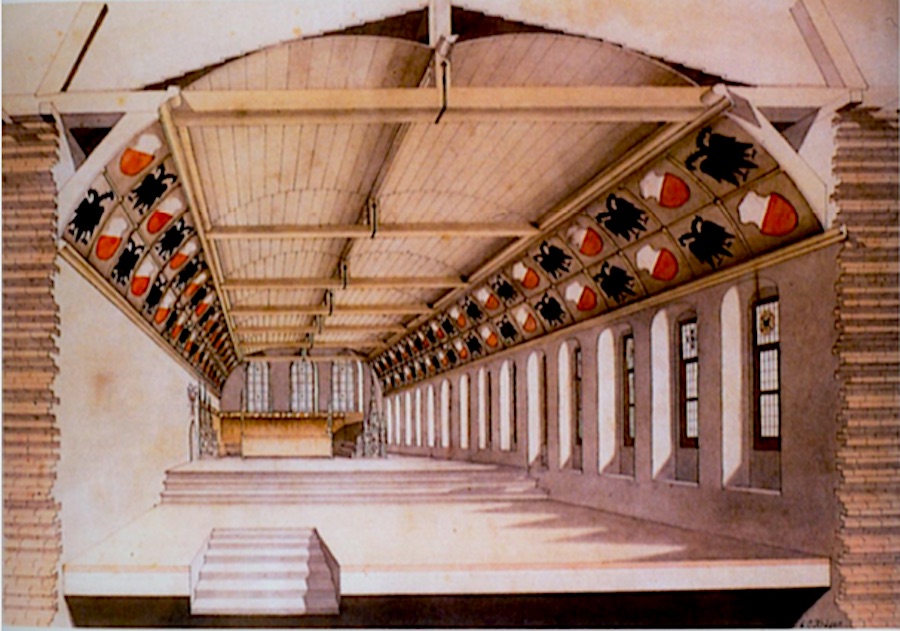 The Hansesaal was located directly above the Audienzsaal, which is still preserved today, but was considerably larger. On the first floor it occupied the entire length of the main building, which is about 38 metres, and it was 10.5 metres wide, 400 square metres together.

The room height was between six and seven meters, a hall with quite impressive dimensions. Unfortunately, it is no longer possible today to say how the hall was furnished, but we know (also from the drawing shortly before the reconstruction) that there was a chair in it that was arranged like a horseshoe.

In this chair the participants took a seat, so they sat opposite each other in two long rows. Unlike today, when we see the reports of political meetings and negotiations on the big stage in the news, there was no round table around which everyone sat. At that time it looked more like what you can see in Fig. 4. The picture shows the session of the Lübeck Council Court at the beginning of the 17th century, which did not take place on the first floor, in the Hansesaal, but on the ground floor of the Lübeck Council Hall, in the Ratssaal. In the rear part of the picture you can see how the councillors found room in their chairs on three sides. 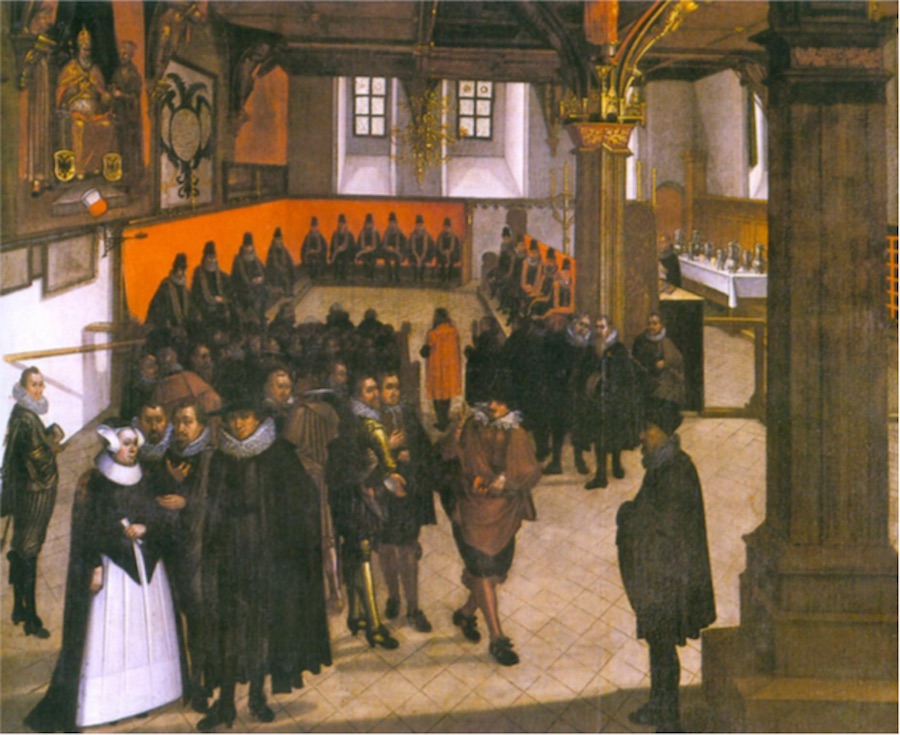 At the opening of the Hansa Convention, however, the guests were not invited to the town hall, but to St. Mary’s Church.

Here the delegates of the Hanseatic cities presumably met in the town chapel of the church for a divine service. Afterwards, the heralds of the council formed a common procession according to their prestige and rank, i.e. the greater the prestige and rank of the city they represented, the further to the front was the appropriate place.

Set up in this way, the delegates probably went in a kind of procession across the market square to the nearby town hall, a procession that certainly caused a commotion.

Arriving at the town hall, the procession was received at the entrance portal of the Hansa hall by the Lübeck mayors and each individual was assigned a seat in the seating according to his or her rank. This hierarchy changed surprisingly little over the centuries. Nevertheless, there were also disputes between the representatives of the cities, a phenomenon that increased over the centuries and occurred above all when the rank that had been held since ancient times no longer corresponded with the current importance and influence of the city.

NewerHanse Convention 500 years ago 2.
OlderConsensus and compromise: The Hansa Convention 4