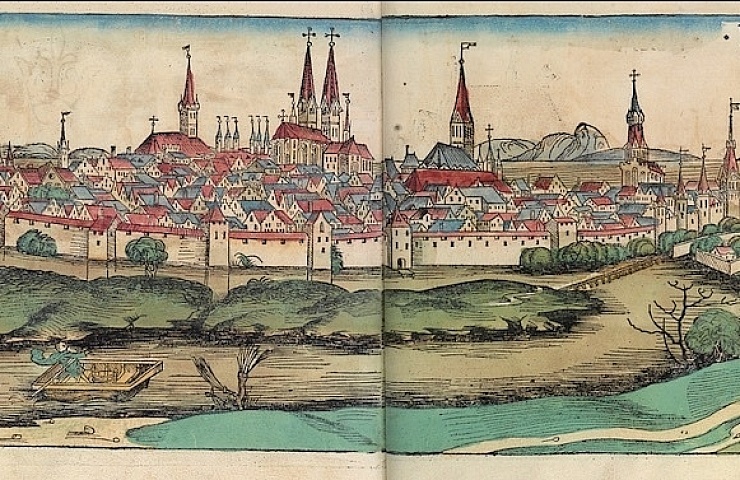 by Maria Seier, historian and doctoral student at the FernUniversität in Hagen, Germany

At the turn of the 16th century, the heralds of the Hanseatic towns met almost without exception in Lübeck for general Hanseatic days. Each day trip usually lasted between three and four weeks and was associated with considerable effort for Lübeck and the participating cities. How do you have to imagine what was going on? How did you meet, where did the guests live and where was the celebration? In two lectures for the European Hansemuseum Lübeck in December 2017 and May 2018, historian Maria Seier explored these questions and gave an overview of how great diplomacy and great spectacle intertwined at the Hanseatic Days of that time.

The Hanseatic League, an association of merchants and cities for economic policy aims, shaped not only the immediate Baltic Sea region, but also large parts of the inland in the Middle Ages and early modern times.

The following is about a Hanseatic event that took place almost exactly 500 years ago and that certainly dominated Lübeck’s city life for a few weeks. We are talking about the Hansetag of 1518, which was held in Lübeck in that year from 19 June to 14 July. These meetings of the Hanseatic cities – called day trips by contemporaries – took place regularly from the middle of the 14th century onwards. Their aim was to better coordinate the common interests in trade and politics in order to speak with one voice. Data on the place, time and circle of participants of the Hanseatic Days can be found in the recesses, the reports of the proceedings and the resolutions drawn up by the Hanseatic meetings at that time.

In the 50 years between 1480 and 1530 a total of eleven meetings were held. The best attended was the Hansa Convention of 1507 with 27 cities represented there, followed by five further meetings with 18 to 20 participating cities – “big politics”, in other words, and altogether a very active phase of the Hanseatic League. In this phase, the meetings lasted on average between three and four weeks and all took place in Lübeck except for the Hansa Convention of 1494.

It is therefore not unusual that the meeting of the Hanseatic city representatives in Lübeck lasted a good four weeks in 1518. A few years could pass between the individual meetings because they were convened as needed, i.e. whenever there was something to discuss and settle. The Council of the City of Lübeck was responsible for the convocation in close coordination with the so-called Wendish cities. The cities of Hamburg, Lüneburg, Wismar, Rostock, Stralsund and Greifswald were called Wendish cities. For the period between the Hanseatic Days, these seven cities took over the day-to-day management, as we would call it today, with the Lübeck Council Chancellery as the executive body assuming the main responsibility.

To prepare for the convening of the Hansa Convention of 1518, the Wendish cities met in Lübeck in February and agreed on the matters to be discussed and formulated an invitation.

The Hanseatic League was not – as is often assumed – restricted to the coasts of the North Sea and the Baltic Sea, but was also well represented in the interior, with the highest density in the area of the present German states of North Rhine-Westphalia, Lower Saxony and Saxony-Anhalt. Altogether, there were a good 70 larger cities which participated in the economic and political settlements and were also represented at the Hansa Convention. In addition, there were about 130 smaller cities which did not participate in the Hanseatic Days themselves, but had their interests represented by the larger cities.

But back to the question of how a Hanseatic Convention was convened and what effect the invitation had on the Hanseatic cities. One felt honoured to belong to an important and prominent circle of cities and gladly accepted the invitation – one could think so. But it was not that simple. The cities weighed exactly whether the financial and time expenditure of the mailing was in balance with the political and economic benefits, because there was no obligation to participate. On this point, the academic view of the political structures of the Hanseatic League has changed in recent decades. Whereas in the past the Hanseatic League had been conceived of as an effective and strictly hierarchically structured organisation under Lübeck’s leadership, more recently it has become clear that the whole thing has to be conceived as a kind of network, with many individual interests and regional differences, which means that the participation and participation of the cities had to be promoted.

There was nothing to force. Therefore Lübeck and the Wendish cities emphasized the general urgency in the invitation or accentuated that this or that point directly concerned the individual cities. Nevertheless, only between ten and twenty Hanseatic cities were usually present at the Hanseatic Days, rarely more. In addition to the journey itself, which lasted a long time, was dangerous and expensive, one shied away from responsibility when unpleasant or difficult decisions had to be made.

No effort was spared with the invitation to the Hansa Convention of 1518 and, in addition to the written invitation, the city secretaries of Hamburg and Lübeck were sent on a mission to the various sub-regions or Hansedrittel in order to promote a visit to the Hansa Convention in a personal discussion. The city secretaries visited the cities of Gdansk, Braunschweig and Cologne. Each of these cities held a leading position in its region, so that the threads ran together at the regional level. Because on the coming Hanse Convention really exciting and explosive plans were to be discussed, so brisant that one did not dare to include them in the invitation sent by letter. Therefore, there were only the insignificant points, the problematic ones were conveyed orally. The two city secretaries from Lübeck and Hamburg did their best, promoted the sending of the Hansa Convention and asked to keep the additional agenda item secret and only pass it on orally.

This item was of concern to all Hanseatic cities and it was extremely important that as many people as possible participated in its discussion. More precise details on the journey of the city secretaries have unfortunately not been handed down, but it is possible to reconstruct from the written tradition how things went on in the various Hanseatic sub-regions.

An invitation to the Hansa Convention was usually associated with a need for coordination and discussion within these sub-regions. Representatives of the involved towns met for regional day trips, so-called one-third days. So also 1518: the Saxon towns made the beginning, which met on 13 April and then again on 20 May 1518 for town days in Braunschweig. The Livonian cities – i.e. the cities in the Baltic States – met for a day trip on 20 April 1518 in Wolmar and the cities of the Cologne third met on 13-14 May in Deventer and on 27 May in Emmerich.

It is not documented how and whether the Prussian and Pomeranian cities also consulted each other in advance, but the procedures may have been similar there. So one can see that, before the representatives of the cities – called council emissaries by their contemporaries at the time – arrived in Lübeck for the Hansa Convention, some work had already been done at regional level to position themselves in relation to the points of negotiation mentioned in the invitation and to coordinate among themselves in the region. It can be assumed that the secret agenda item to be passed on only orally was also discussed. As a result of this procedure, the city representatives sent to Lübeck received precise instructions from their city council as to what opinion they had to take on the individual points, to what extent they could accept compromises or where they should not agree under any circumstances.

The efforts to win participation were successful, as a total of twenty Hanseatic cities decided to participate in 1518. This number is very considerable, because in the beginning both the cities of the Saxon third and the cities of the Cologne third did not want to send the Hansa Convention. The doubts of the Saxon cities could be cleared up and besides representatives from Braunschweig and Magdeburg the cities Göttingen, Hildesheim, Goslar, Einbeck and Hannover took part.

But the Lower Rhine and East Netherlands cities of the Cologne third could not be persuaded to change their minds and stayed away from the meeting because they feared unpleasant decisions in connection with the Bruges office. Thus only representatives from Cologne, Dortmund, Münster and Soest came from this region to Lübeck.

If in the early summer of 1518 about twenty city delegations prepared themselves for a visit to the Hansa Convention, which persons were appointed to represent the city in Lübeck? Men who were authorized to represent the city politically, i.e. were members of the council, possibly even Mayors. Smaller cities usually sent a delegate, larger cities even two or three. They did not embark on the often long journey alone, but were accompanied by staff. The spectrum ranged from armed men to protect the travellers, to legally trained personnel to support the negotiations, to stable servants and personal attendants. It is difficult to say how large the average group was that made its way to Lübeck.

NewerRatas: Auvere Power Plant helps us to meet the goals of our energy sector
OlderHanse Convention 500 years ago 2.