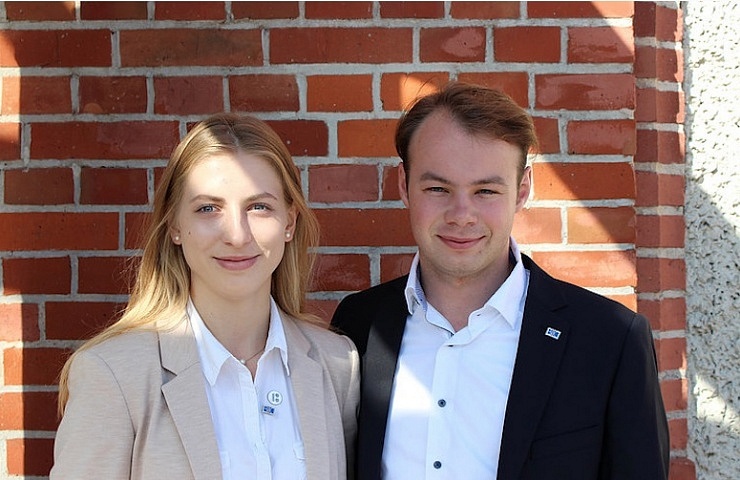 “Why do we need a youth dimension for the Baltic Sea region?” Agnes Lusti (20) answers without any hesitation. “We young people often have a different perspective.

But the moderator wants to know more about it and asks for an example. The 150 people in the conference hall of the Baltic Philharmonic Orchestra in Gdansk are pricking up their ears. Everyone is curious to see how the new spokeswoman of the BSSSC youth will pull herself out of the affair during her first public interview. Only yesterday the young Norwegian was elected spokeswoman by the young people. She will hold the post for two years and for one year form a double leadership with Martin Rümmelein (24) from Schleswig-Holstein.

After a short hesitation, Agnes answers: “Most people in this room will certainly think of the coffee waiting for us in the break when they look at the door. I think of the fresh air out there”. With this she has captured the sympathies of the audience in one fell swoop. She will need the support of the BSSSC in the coming months, because she has set herself some plans for 2019, which are perhaps quite well described by the Baltic Sea image of the “fresh breeze”.

But what is BSSSC (pronounced: B-TrippleS-C) anyway and what role does the youth play in this committee? Behind the abbreviation lies the Baltic Sea Subregional State Coordination, i.e. the assembly of the regions of the Baltic Sea states. For Germany, for example, Mecklenburg-Vorpommern, Schleswig-Holstein and Brandenburg are represented in this body. In Finland the regions like Häme, in Norway the province like Østfold or in Poland the voivodships like Pomerania. The network comprises regions from 10 Baltic Sea countries. Each country can send two members to the board and also the BSSSC youth is equally represented there with two members.

And they take their function very seriously, as the preparation for the 26th conference from 12-14 September 2018 in Gdansk has shown. Already in April 2018 they met together with about 20 young people in Hämeenlinna in Southern Finland to develop ideas and demands on the topics Green Future, Smart Cities, Digitisation, Silver and Youth. The main purpose of the workshops was to stimulate the dialogue between the youth and the board, to develop position papers and to initiate initiatives and events, to get to know each other, to exchange ideas and to develop something like a Baltic Sea feeling or a Baltic Sea identity.

A second preparatory round took place in the immediate run-up to the BSSSC conference in Gdansk. Together with young people from Gdansk, the focus of this meeting was on cooperation between the generations (Silver and Youth) and – how could it be otherwise in Gdansk – on the topic of solidarity. Despite the efforts of the organizers of the Marshall Office Pomerania, it was unfortunately not possible to arrange a meeting with Lech Welesa. But the visit to the European Solidarność Centre, which commemorates the trade union Solidarność and its leader Lech Walesa, was also able to give young people an idea of how the end of communist rule in Poland in the 1980s and later in the entire so-called Eastern bloc was initiated. If one wanted one could interpret the visit as an inspiration for a small youth revolt in the Baltic Sea region.

The following day, in the newly renovated “Polish Sky Room” of the Marshall Office of Pomerania, the theme of solidarity was worked on in a playful approach, resulting in a small play that was performed by the Baltic Sea youth at the BSSSC conference.

Young people have been playing an important role in the BSSSC for about 10 years – they have already done a lot of convincing work on their own behalf during this time. In the final declaration of the Gdansk conference, for example, there is also an explanation of what the political leaders hope for from the young people.  “BSSSC recognizes the youth of the Baltic Sea region as important stakeholders when it comes to discussions about the Baltic Sea region today and tomorrow. Young people are more sensitive to many challenges – and through the way they live and communicate, they have a special sense of change in our societies”.

Therefore, the BSSSC also wants to work to ensure that young people are given a fixed role and influence in the new EU Baltic Sea Strategy (EUSBSR) after 2020. In addition, the political coordinators of the EUSBSRs should already involve young people at working level in the committees.

This is exactly what the young people expect from the BSSSC: In the future, the BSSSC final declarations will no longer have a separate youth chapter, but the young people will be directly involved in the working groups and committees and will be directly involved in major topics such as demographic change, future viability and digitisation and thus have a say in the results.

The next opportunity to show that the demands are to be taken seriously will come next year immediately before the meeting of the EUSBSR Conference (10-12 June 2019) in Gdansk. There will be the first Baltic Sea Youth Event – in cooperation with the Baltic Sea Council Youth Group – with over 100 participants from all Baltic Sea countries. Something like a Baltic Sea identity will then be filled with life in a larger setting. The focus will be on the topic “Circular and sharing economie as answer for demographic change”. The Baltic Sea Council and the BSSSC not only support all of this ideologically but also financially. So far, it seems, the young people with their concerns and considerations have met with little resistance. And at the upcoming 27th BSSSC conference in Klaipeda (Lithuania) – it will then have to become clear to what extent the stiff youth breeze, which entered the BSSSC board with Martin and Agnes, actually has an effect on political content.