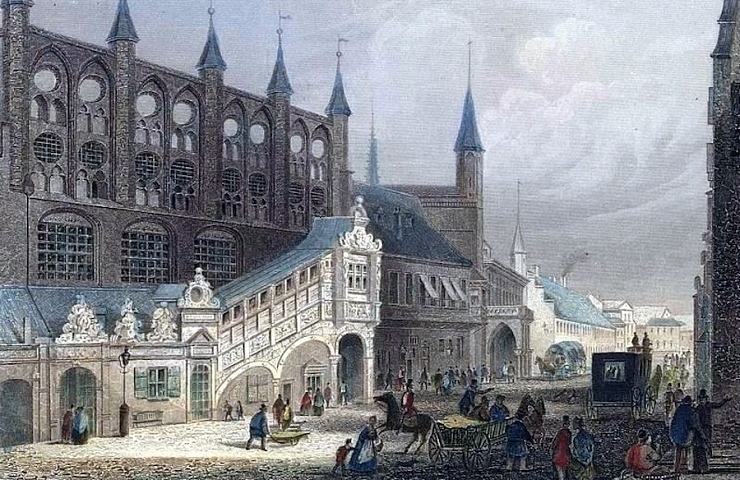 In order to discuss the various items on the agenda, which were on the agenda for 1518, the meetings were held from 19 June to 14 July on all working days, including Saturdays. Presumably the meeting began at seven o’clock in the morning with a service in the Marienkirche, but perhaps also in the town hall. The meeting days, which were interrupted for a lunch break, were concluded in the afternoon with wine and confectionery, a tradition that lasted until the 17th century. Wine and confectionery were quite common at that time and have been handed down for the council meetings of many cities in the 15th and 16th centuries. In Lübeck, for example, the afternoon council meetings began with the Council servants first serving Rhine wine, then Hippokras – a strongly flavoured red wine -, then Rhine wine again and then Hippokras twice again. Even the buildings of the town hall were equipped for this purpose, as a narrow servant staircase led from the Ratsweinkeller in the basement of the town hall to the “Audienzsaal” on the ground floor and to the Hansesaal on the upper floor. 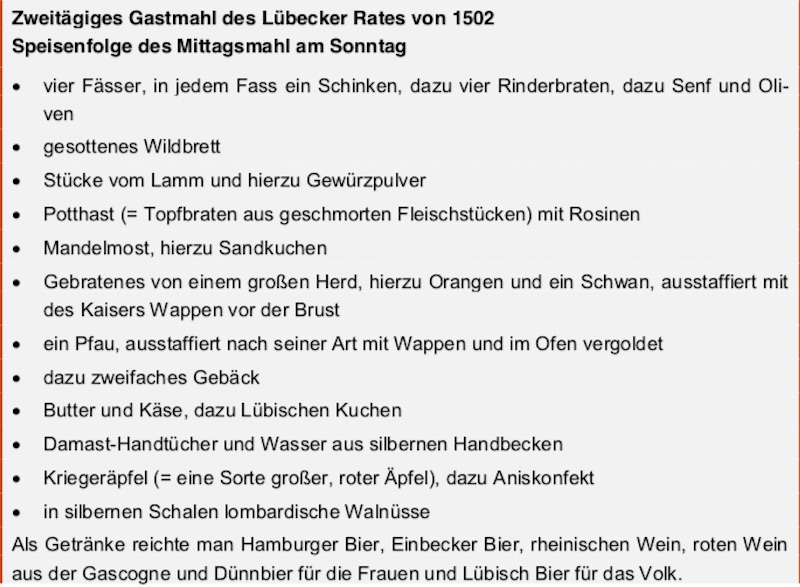 Unfortunately, no further details about the celebrations and guest banquets during the Hanseatic Days have been handed down. But we know of a similar banquet that the Lübeck Council hosted 1502 at the Olafsburg and in which the Lübeck upper class participated at that time, about 50 persons. The banquet endured for two days and the individual meals consisted of ten to twelve courses each (see Fig. 5). Also in 1507, the guest meal organized for the Hansa Convention participants seems to have lasted two days, because on Monday after Trinitatis, 1507, the regular meeting was cancelled. So you can see that there was not only work, but also celebration. And it is obvious that at such celebrations the contacts among each other were cultivated and expanded, so that networks and patronage were also involved.

As a final summary of the Hanseatic Days at the turn of the 16th century, it should be noted that many details of the organisational and communicative processes of the Hanseatic Days can be reconstructed with the help of the written records. It has thus become clear that the Hanseatic City ambassadors, with the financial support of their hometowns, went to considerable lengths to clearly accentuate the honorary status claimed by them at the conference venue by the size of their retinue – here primarily the number of horses -, by the magnificence of their clothing and equipment and by the performances of the musicians. Both the gifts of wine of honour and the allocation of an appropriate hostel are to be understood as a reaction of the host city to the displayed honorary status of the arrivals. By means of these interactions, the fine scales and gradations possible in them, a first preliminary clarification was carried out with regard to the appearance and reputation at the Hansa Convention and thus the mutual expectations and assessments were coordinated with each other. In this way the field was prepared for the subsequent ceremonies for the opening of a Hansa Convention, for the place in the rank and seat order, which was of central importance as a technical procedural basis for the later negotiations.

From the compiled details on the schedule and organisation of a Hansa Convention, however, it also becomes clear how much the agenda around the day trips affected Lübeck’s city life. Urban life in Lübeck was touched much further than research has taken into account so far. For example, the accommodation of the envoys with the Lübeck council families, the musicians playing and the city servants who distributed the wine of honour, the presumably daily procession of the messengers from the Marienkirche to the town hall and the splendour of festivities celebrated together. The fact that it was possible for the foreign envoys on the one hand and the Lübeck upper class families on the other to establish a far-reaching network of personal contacts and connections to other cities and trading centres is obvious and offers new approaches to the research of the networks of Hanseatic trade. It also leaves an open question for further research as to what this meant for the self-image of the Reichs- und Hansestadt Lübeck. How and in what way did the inhabitants of Lübeck take note of this at that time? But finding an answer to this question is a different story and it will be told at another time.

Literatur on these topics:

NewerConsensus and compromise: The Hansa Convention 4
OlderDangerous Contaminated Sites in the North Sea and Baltic Sea