Dangerous Contaminated Sites in the North Sea and Baltic Sea 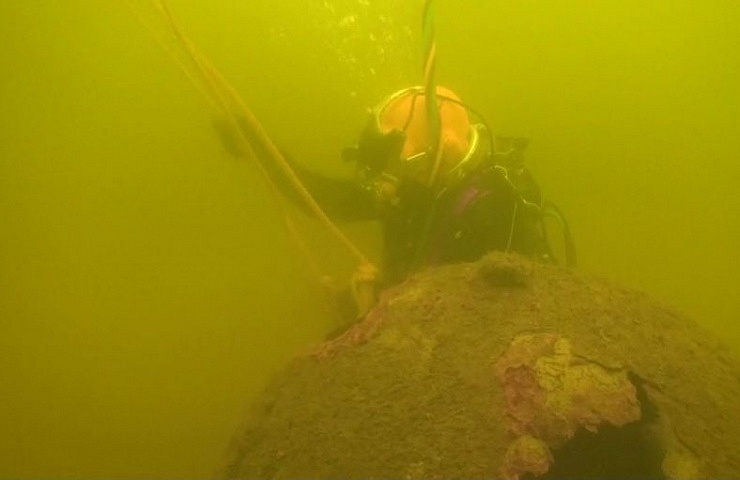 Millions of tons of old ammunition and poison gas grenades lie at the bottom of the North and Baltic Seas – dangerous relics of the two world wars. After all, the old munitions rust and release their toxic ingredients. Removal is dangerous, complex and expensive. This is why Fraunhofer researchers are working with salvage companies to develop a robotic system that enables semi-automatic disposal.

According to current projections, around 1.6 million tons of conventional and 220,000 tons of chemical weapons are stored at the bottom of the North and Baltic Seas and have been rotting away for decades – an enormous danger potential for flora and fauna as well as for salvage personnel. These explosive legacies of war are increasingly becoming a problem. Because construction sites at sea are increasing, new shipping lanes have to be excavated, pipelines built and submarine cables laid to connect wind parks to land. The arsenal of weapons detected by explosive ordnance clearance services ranges from pistol cartridges and bazookas to sea mines, explosive bombs, incendiary bombs, torpedoes and poison gas grenades. Most of the explosive cargo was sunk into the sea at the end of the Second World War. On behalf of the Allies, fishermen were to dump the explosive ordnance in designated areas far out at sea. But obviously some tipped the cargo into the sea much earlier in order to save fuel. This is why there is a lot of ammunition outside the marked munitions areas. In addition, old mines, torpedoes and bombs are relocated by strong currents and bottom trolling.

The divers of the Explosive Ordnance Clearance Service have to remove ammunition from fairways that were considered mine free. Thanks to sensitive sonar technology and magnetic probes, war scrap can now be better tracked down – and all the more bombs, grenades and mines are discovered. Up to now, however, clearance has only been possible in dangerous manual work by divers from explosive ordnance clearance services or specialised companies. Large bombs cannot be recovered: Often the change in pressure is sufficient for them to explode. This is why they are relocated to the known munitions areas or blown up on site. However, some of the toxic explosives are dispersed over large areas in the water. In addition, an explosion can fatally injure marine creatures such as porpoises or fish.

New environmentally friendly, safe and economical solutions are needed to eliminate large quantities of the explosive war heritage. For example, researchers from the Fraunhofer Institute for Chemical Technology ICT in Pfinztal, supported by the Federal Ministry of Economics and Energy, are working with the University of Leipzig and several industrial partners to develop a “robotic underwater salvage and disposal process including technology for the delaboration of ammunition in the sea”, or RoBEMM for short. The project is coordinated by the explosive ordnance disposal company Heinrich Hirdes EOD Services GmbH. “The long-term goal of the project,” explains Paul Müller of Fraunhofer ICT, “is to semi-automatically render the ammunition harmless and dispose of it in an environmentally friendly manner directly at the location where it is found under water. Automatic Klein GmbH is responsible for the automation and connection of the subcomponents.

The Fraunhofer ICT contributes its core competence in the safety analysis and characterization of hazardous substances. The task was to design the handling of the explosives in all process steps in such a way that the unavoidable residual risk of a spontaneous explosion is minimized. This ranges from ammunition handling and dismantling to the destruction of explosives and the treatment of residual materials. An important element is to reduce the sensitivity of the explosive by adding water and then crushing it. Then the metal shells are cleaned and the explosive is incinerated so that only scrap metal is brought ashore.

Every bomb is different

Even after more than 70 years, the warfare agents are still dangerous. The explosives can still explode, and the degradants are highly toxic. Researchers at the Fraunhofer ICT, for example, have found that the impact sensitivity of explosives can even be increased. In order to avoid spontaneous detonation, the greatest care must be taken during handling. The extremely different ammunition formats are a major problem. At the end of the war, all available materials were used for the production of ammunition. Therefore one never really knows which ingredients are present and how they might suddenly react with each other. “From the safety-related investigations of the explosive mixtures actually used at the time, we were able to deduce what has to be taken into account during handling,” says security expert Paul Müller. The first tests with the new RoBEMM salvage and disposal system, which can replace the currently dangerous diving operations and the often alternative blasting of ammunition, will soon begin.