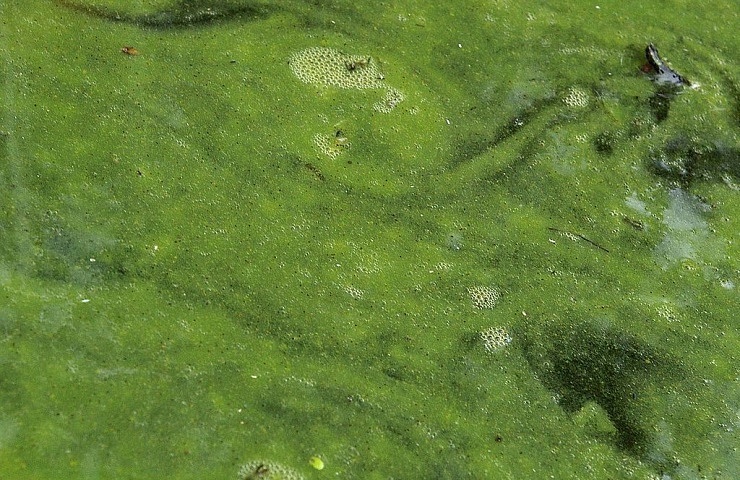 In the international journal Limnology and Oceanography, the Rostock marine biologist Natalie Loick-Wilde reports about a study in the central Baltic Sea with which she and her colleagues from the Leibniz Institute for Baltic Sea Research Warnemünde and the US-American Georgia Institute of Technology succeeded in proving that blue algae produce an excess of amino acids at a late stage of their bloom.

In a typically nutrient-poor season, this leads to a surprising food supply for marine microorganisms and thus for the entire food web.

Our seas are not everywhere fertile and full of colourful, diverse life. Wide areas of the world’s oceans are naturally poor in nutrients. The fact that marine life nevertheless develops and is maintained is to a large extent the work of cyanobacteria (colloquially: blue-green algae). Thanks to their unique ability to harness atmospheric nitrogen – a process known in science as nitrogen fixation – they are also able to cope with the small amounts of phosphorus that a nutrient-poor ocean has to offer in order to multiply on a massive scale. However, these relatively large and often still toxic organisms are unsuitable for direct use in the food web. Rather, it is the amino acids produced by the blue-green algae that supply the food web so that zooplankton and fish can also be fed. However, it has so far been largely unclear how high the amino acid synthesis is during nitrogen fixation and what influence the ripeness of the flower has.

Natalie Loick-Wilde and her colleagues used a research trip to the central Baltic Sea in summer 2015 to take a closer look at the amino acid supply at the peak and at the beginning and advanced decay of a blue-green algae bloom. The Baltic Sea is generally not a nutrient-poor sea, but in midsummer its nitrogen and phosphorus reserves are largely depleted. Then, even in the Baltic Sea, which is suffering from over-fertilization, it is “blue-green algae time”. At four stations in the western and central Baltic Sea, the team sampled blue-green algae flowers of different ripeness, incubated the samples on deck of the research vessel during the voyage and later determined the total nitrogen content and the amino acid-specific nitrogen content. Using stable nitrogen isotopes in the amino acids, they developed an approach to investigate the synthesis of 13 amino acids during nitrogen fixation for the first time.

“We are one of the few laboratories worldwide that can apply compound specific isotope analysis (CSIA-AA) to amino nitrogen,” reports Natalie Loick-Wilde. “Only then has this approach become possible that allows us to see how much essential nutrients are formed for a food web.” It turned out that at a time when the blue algae themselves already largely cease their activity, such quantities of amino acids are still released during flowering that this must inevitably have consequences for the food web. In view of the predicted global increase in blue-green algae blooms, this oversupply of nutrients before winter is a relevant factor for the annual cycle of zooplankton – but also of fish stocks – and its development and effects should be monitored.

The IOW is a member of the Leibniz Association, which currently comprises 91 research institutes and scientific infrastructure facilities for research. The Leibniz Institutes’ focus ranges from the natural, engineering and environmental sciences to the economic, social and spatial sciences and the humanities. The federal and state governments jointly support the institutes. The Leibniz Institutes employ a total of 18,100 people, 9,200 of whom are scientists. The total budget of the institutes is more than 1.6 billion euros. (www.leibniz-gemeinschaft.de)