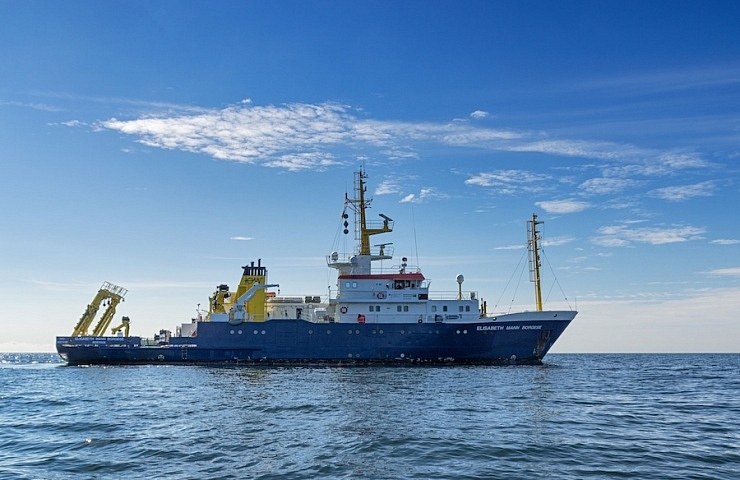 On 17 November 2018, the research vessel ELISABETH MANN BORGESE departed from its home port of Rostock-Marienehe for its 200th voyage. The destination is the Gotland Basin in the central Baltic Sea. Here, the scientific team headed by oceanographer Lars Umlauf of the Leibniz Institute for Baltic Sea Research Warnemünde (IOW) will investigate small-scale turbulent mixing processes in the sea, the exploration of which is important for improving climate forecasts. The research vessel ELISABETH MANN BORGESE has been serving Baltic Sea research since 2011. The ship is owned by the state of Mecklenburg-Vorpommern.

The ship was already built in 1987, at that time for the use of the military technical service of the navy. In 2011, after extensive restoration and conversion work, it was transferred to the IOW and replaced the research vessel PROFESSOR ALBRECHT PENCK. The new research vessel was named after the “Ambassador of the Seas” Elisabeth Mann Borgese in recognition of her scientific and political work to protect the seas. With up to 300 days of operation per year, the EMB’s timetable – the short form of the ship’s name – is tightly packed. The voyages lead almost exclusively to the Baltic Sea. Further information on the equipment of the ship is listed in the appendix.

About the programme of the 200th voyage: The anniversary voyage of ELISABETH MANN BORGESE is an important piece of the puzzle in a special research area funded by the German Research Foundation (DFG) to improve climate predictions. As part of this major project, a team of oceanographers, atmospheric scientists and mathematicians are jointly investigating how the energy balance of the ocean and the atmosphere can be mapped in climate models even better than before. On the ocean side, a recently discovered class of marine eddies in the size range of 100 – 1000 metres plays a key role. Although the Baltic Sea does not have a significant impact on the Earth’s overall climate system, it has been found that the central Baltic Sea in particular is an almost unique “natural laboratory” for the investigation of these interesting vortex structures.

It is therefore no coincidence that Swedish and Latvian waters east of the island of Gotland are the destinations of the 200th expedition of Elisabeth Mann Borgese. The team of 12 scientists from the IOW, the Helmholtz Centre Geesthacht and other research institutions will be on the trail of small-scale marine vortices to gather information for a better description in climate models. Research into these structures, which are notoriously difficult to measure due to their relatively small size, was only possible thanks to special technologies and measurement strategies. “When we study vortices and filaments in the order of a few hundred metres, it is imperative that we prevent our research vessel from disturbing the situation. That is why we use measuring instruments that operate independently or at a suitable distance from the ELISABETH MANN BORGESE.” The Warnemünde oceanographer Lars Umlauf has autonomous underwater vehicles such as Glider, but also a research catamaran and the so-called Scanfish, which is towed at a sufficient distance from the ship, on board for this purpose. “At selected stations, we will also use the so-called microstructure probe, with which we can also measure the smallest of all vortices with a size of only a few centimetres. As scientific cruise leader, Lars Umlauf must coordinate the use of this diverse fleet of instruments and at the same time ensure communication with the ship’s command. “The 200th voyage is a bit different than usual, because we do not yet know exactly where the weather conditions will provide us with the best conditions for our measurements. We will have to handle this flexibly on site.”

Captain Uwe Scholz is responsible for ensuring that the needs of science are implemented as well as possible. He has been the captain of ELISABETH MANN BORGESE since it went into service and has also become acquainted with the complicated research sea voyage as captain on the predecessor ship, the PROFESSOR ALBRECHT PENCK. Thanks to the experience of Uwe Scholz and his crew of 10, the scientists can rely on safe navigation and the simultaneous use of measuring instruments.