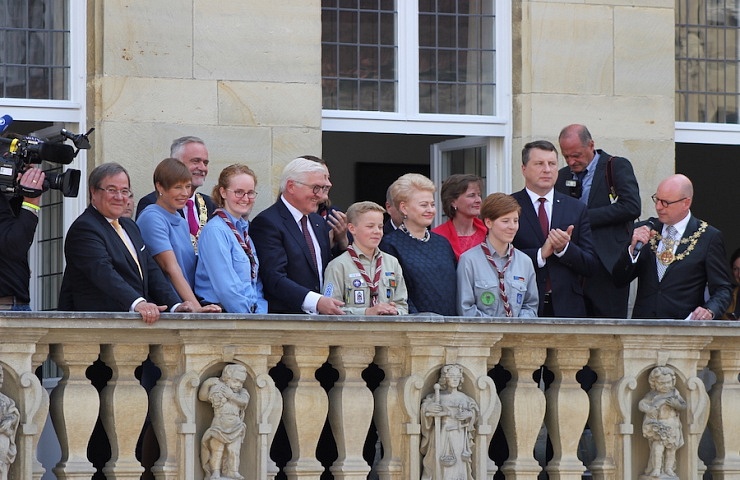 20 Years International Prize of the Peace of Westphalia: At the anniversary in Münster on Saturday, whole countries were awarded for the first time with Estonia, Latvia and Lithuania.

The three Baltic states share the 100,000 Euro prize with the Pathfinders who received this year’s Youth Prize. The Peace Prize is awarded every two years by the Economic Society for Westphalia and Lippe (WWL) in the historic town hall of Münster – based on the end of the Thirty Years’ War in 1648, which went down in history as the “Peace of Westphalia”.

Since German Federal President Frank-Walter Steinmeier presented the bronze sculptures of the Westphalian horse to Estonian President Kersti Kaljulaid, Lithuanian President Dalia Grybauskaitė and Latvian President Raimonds Vējonis at noon, the populations of all three states can also feel that they have won the Peace Prize. In his laudation, Steinmeier praised “the performance of people in the Baltic States to look the past in the face without letting themselves be captivated”. The Federal President addressed himself directly to the Estonians, Latvians and Lithuanians: “We are grateful that you and your countries are not only keeping the memory of the injustice, but are prepared to reconcile with us Germans.

In their thank-you speeches, the three heads of state expressed their unity on Europe, peace and reconciliation. Dalia Grybauskaitė, Lithuanian President, praised the role of the Germans: “Germany is investing a lot in Europe’s future”, she explained, “We stand by its side. Latvian President Raimonds Vējonis warned that “whenever Europe was divided and torn, it caused suffering”. “Europe has a future only if it is united,” he underlined. “The times of peace are times when peace must be built instead of resting on it,” said Estonian President Kersti Kaljulaid.

In his laudation, Laschet praised the scouts as “role models who embody the ideals of a peaceful, tolerant world”. The Minister President of North Rhine-Westphalia emphasized that it is more important today than ever to stand up for each other and look after each other. “Once a scout, always a scout: That is a good motto”, which should apply to all of us, says Armin Laschet.
The International Peace of Westphalia Prize, which has been awarded since 1998, has already gone to Václav Havel, Helmut Kohl, Carla del Ponte, Kurt Masur, Valéry Giscard d’Estaing, Kofi Annan, Daniel Barenboim, Helmut Schmidt, the crews of the ISS space station and the Jordanian King Abdullah II ibn Al Hussein. Together with personalities or representatives of states that have become role models for peace work in Europe and the world, young people are also always honoured whose actions have set an example for political, social and ecological reconciliation and thus for peace in the world. Most recently, the Aktion Sühnezeichen Friedensdienste and the youth work of the Volksbund Deutsche Kriegsgräberfürsorge e. V. were honoured here.