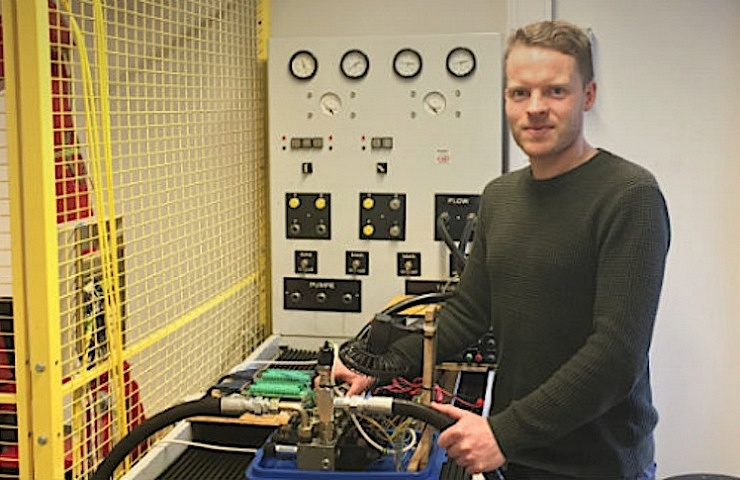 Maintenance of offshore wind turbines costs a small fortune in both inspections and repairs as well as in downtime when the turbine blades are not producing power.

So representatives from both Vestas and Ørsted applauded when they recently attended a PhD defense by Jesper Liniger of Aalborg University Esbjerg.

Jesper Liniger has developed several mathematical algorithms that can detect errors in wind turbines before they occur. The algorithms can thus save wind turbine owners millions of kroner both in terms of reduces maintenance costs and lost energy production.

– This means, first of all, that wind turbine owners can save money by not having to inspect their wind turbines as often as they do today. Secondly, they can eliminate a great deal of the downtime for repairs and get up to one percent more energy out of a wind turbine over its service life, explains Jesper Liniger.

Most Danes have probably seen a wind turbine, but only a few of us know what is going on inside them.

Wind turbines consist of several different systems that, for example, cause the blades to rotate or collect energy. In addition, wind turbines also have systems to ensure that the entire turbine does not get out of control and tear apart when the wind is exceptionally strong. This system – the pitch system – is the cause of, on average, 20 percent of all wind turbine downtime.

Broadly speaking, the pitch system is a hydraulic system that can build up high pressure which can be used to stop the wind turbine in an emergency even if the turbine does not have power. The system is not infallible, however, and requires frequent inspections to ensure that there is enough gas in the system to create the necessary pressure. So wind turbine owners often send a boat out to offshore wind turbines to inspect the wind turbine gas pressure; this becomes very expensive over the service life of a wind turbine.

Jesper Liniger can save wind turbine owners part of this cost.

– One of the most critical errors in the pitch system is when gas leaks out of the accumulator that collects energy. If this happens, the emergency brake does not work. The algorithm I developed for the pitch system, however, can calculate when the accumulator runs out of gas and it’s time for a refill. So you don’t need to examine it in the actual wind turbine; you can do it from a distance instead, says Jesper Liniger.

Monitoring oil pressure can reduce the costs of inspection

More specifically, Jesper Liniger’s algorithm can calculate the gas pressure via measurements of variations in the accumulator’s oil pressure, and it can do this without sending an expensive boat out to the wind turbines. Wind turbine owners must still send boats out to wind turbines to replenish gas, but the interval between inspections can be longer since they now know whether or not there is enough gas in the system. In other words, they do not have to inspect the wind turbines as often.

Furthermore, the algorithm does not require installing new measuring equipment on the wind turbines, so it can also be used on wind turbines already standing out at sea.

– If you have a wind farm, it can quickly cost a million kroner to send a boat out to inspect the wind turbines, and if you can save a boat every now and then, all else being equal, it’s good for the bottom line, says Jesper Liniger.

In his PhD, Jesper Liniger created several different algorithms that predict potential errors in wind turbines before they occur. All the algorithms can save wind turbine owners both money and worries.