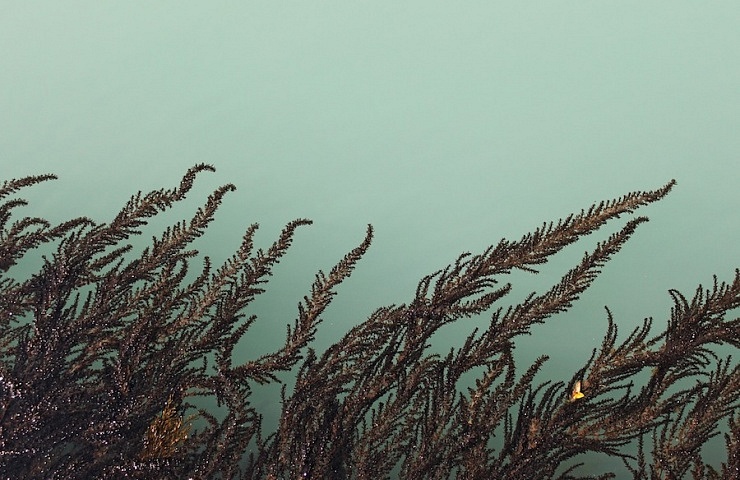 “All life comes from the sea.” The Greek physician Hippocrates von Kós was right about 2000 years ago. The mineral distribution in human blood plasma is still almost identical to that of seawater. The special feature of these minerals is that they are present in seawater in a form that allows them to penetrate the epidermis and fully develop their vital functions in the cells. Applications with elements of the sea and the sea climate itself are therefore particularly effective. The most important raw material sources for marine active substances are natural seawater and marine algae.

Unlike land plants, algae have no roots through which they absorb nutrients and water. Instead, they absorb the minerals and trace elements directly from the sea water over their entire surface and can store them in very high concentrations. This is why they have the highest nutrient density of all plants. One kilogram of fresh algae contains marine active substances from around 10,000 litres of seawater. Seaweed can store a thousand times more iodine, a hundred times more calcium and ten times more magnesium and copper than land plants. These minerals regulate and activate physical and mental performance, biological metabolism and are involved in protective or immune processes. Algae contain all the minerals the human body needs. At the same time, they are organically bound so that the body can use them well.

Of the more than 39,000 known marine algae species, about 50 are currently used in the cosmetics industry. These are mainly brown and red algae. Macroalgae, so-called kelp, have an important function for the marine environment, as they are an important habitat for many marine life. Brown algae can form huge underwater forests and thus produce as much oxygen as tropical rainforests, absorb excess nutrients and thus improve water quality. As an active ingredient in cosmetics, it is therefore particularly important to use algae from sustainable wild collection or from algae farms, which protects natural populations and has a demonstrably positive impact on the environment. Cultivated algae are also characterised by high standards of quality control and cleanliness.

The most important algae substances and their effect

As described above, marine algae have a very high active substance density. More than 80 different substances are detectable in algae. The most important ones are listed below:

Marine minerals (potassium, calcium, magnesium, sodium, chloride, etc.) and trace elements (copper, selenium, chromium, zinc, iron, iodide, strontium, etc.) stimulate the metabolism, promote blood circulation and maintain the skin’s natural moisture factor (NMF). Due to the stimulated metabolism and the improved oxygen uptake, the detoxification functions of the skin can be promoted and slag can be better removed. The most important minerals, potassium, sodium and chloride, regulate the water balance of the cells and improve the function of the skin barrier, i.e. the marine minerals sustainably increase the moisture content of the skin. Magnesium also strengthens cell metabolism, iodide promotes blood circulation. The skin appears firmer and smoother. The strontium and selenium salts contained in seawater have a positive soothing effect on inflammatory skin diseases.
Approximately 20 amino acids (protein building blocks, e.g. histidine, isoleucine, lysine, methionine, tryptophan, glutamic acid) provide building blocks for the metabolism, prevent dehydration and have a refatting effect and strengthen the supporting tissue of the epidermis.
Vitamins (A, B2, B12, C, D, E and K, folic acid) and antioxidant polyphenols protect the skin from negative environmental influences, free radicals and thus prevent premature skin aging.
Special algae sugars (e.g. alginate, fucoidan, laminarin) act as active ingredient carriers and have a particularly moisturising, regenerating and firming effect on the skin.
Antioxidants such as polyphenols protect the skin from negative environmental influences and strengthen its resistance. Extremely effective moisturizers that prevent the algae from drying out at low tide ensure that the skin can retain moisture for longer in cosmetics.
The different metabolic groups act synergistically and thus provide the skin with particularly effective moisture, supply the cells with energy and thus activate cell metabolism, improve regeneration and cell renewal.

Thalasso therapies with marine active ingredients have been providing relief and healing for various skin diseases for centuries. Research confirms that marine minerals, especially magnesium, strontium and selenium, counteract inflammation. Seawater also contains very rare trace elements which the body does not need in considerable quantities, but if they are not present, deficiency symptoms can occur. The natural skin barrier is improved by sodium, potassium and chloride, selenium increases resistance to oxidative stress and strontium alleviates itching in skin diseases.

Due to the natural composition of the elements – which corresponds to the composition of blood plasma – the marine active substances in algae are particularly effective, as they can penetrate the living skin layer (stratum basale) and fully develop their vital functions in the cells. Marine cosmetics stand out within natural cosmetics because the ingredients are more complex to adapt to stress factors than land plants due to the evolutionary advantage of marine plants. In addition to marine minerals and rare trace elements, marine cosmetics contain special algae sugars, amino acids with UV protection, vitamins and polyphenols that protect against negative environmental influences and free radicals while at the same time providing and retaining moisture. The positive effects are immediately noticeable and visible.