Ammunition in the sea: Effects only poorly known 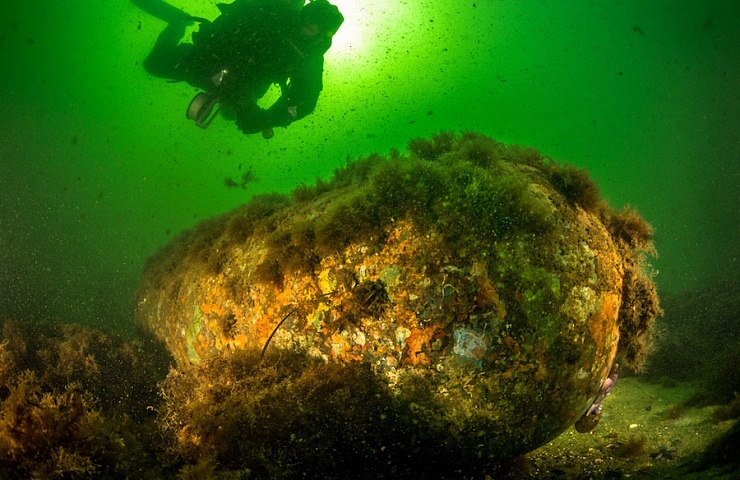 Even more than 70 years after the end of the Second World War, countless pieces of ammunition from this period still lie in the oceans of the world and are corroding. Once the shells are damaged, the explosives can release toxic substances into the sea water.

A new survey study published by researchers at the GEOMAR Helmholtz Centre for Ocean Research Kiel and the Schleswig-Holstein Ministry of the Environment in the scientific journal Frontiers in Marine Science points to considerable gaps in knowledge regarding the distribution and effects of these chemicals for marine ecosystems.

Sea mines, air bombs, torpedo heads and grenades – the coastal waters of the North Sea and Baltic Sea are littered with explosive relics from the wars of the 20th century. More than a million tons of intact and corrosive ammunition lie there on the seabed, partly in real heaps, if they were disposed of deliberately after the wars, partly scattered, as they were sunk or lost during the war.

A new study recently published in the international journal Frontiers in Marine Science shows that this problem does not only affect the North Sea and the Baltic Sea. “This is indeed a global problem, as coastal regions of almost every continent are affected by underwater ammunition,” says lead author Dr. Aaron Beck of the GEOMAR Helmholtz Centre for Ocean Research Kiel.

For the study, Dr. Beck, together with other authors from GEOMAR and the Ministry of Energy, Agriculture, Environment, Nature and Digitisation of the State of Schleswig-Holstein, compiled information and literature on ammunition in the seas worldwide. The team describes the extent of the underwater ammunition problem and summarizes the known biogeochemical behaviour and the ecological effects of ammunition-related chemicals in the marine environment. The study was carried out in cooperation with the GEOMAR-led BMBF research project UDEMM: Umweltmonitoring für die Delaboration von Munition im Meer, in which the Christian-Albrechts-Universität zu Kiel, the Leibniz Institute for Baltic Sea Research Warnmünde and the initiative “Zukunft Meer” of the State of Schleswig-Holstein are also involved.

“Although the problem of ammunition is widespread in the sea worldwide, it has received surprisingly little attention so far. The motto is often’out of sight, out of mind’. There are always accidents with fishermen or with walkers on the beach,” says Dr. Beck. In many cases, neither the exact location, nor the identity or condition of underwater ammunition is known. At the same time, shipping traffic is increasing and the number of pipelines, offshore wind farms and aquaculture facilities is increasing. It is therefore becoming increasingly urgent to collect more information about munitions in the sea and to eliminate them.

A large part of the old ammunition has been in the water for more than 70 years. As a result, many metal housings are now highly corrosive. Damages ensure that the explosive is exposed inside and can release chemicals into the surrounding water. Explosive compounds are poorly soluble in water, but they contain toxic and carcinogenic chemicals. “The release and future fate of these chemicals are not yet well understood,” says Dr. Beck, “but it is precisely these processes that are crucial for assessing how old ammunition can affect marine ecosystems.

The UDEMM project will at least partially close the knowledge gaps identified in the new overview study. The project focuses on an ammunition deposit in the Baltic Sea near the Kiel Fjord.

Dr. Ulf Gräwe and his colleagues at the Leibniz Institute for Baltic Sea Research Warnemünde (IOW) also use oceanographic model calculations to understand physical and chemical processes that influence the spread of chemicals from the study area to the entire southwest Baltic Sea. Researchers at the Institute of Toxicology and Pharmacology at CAU, headed by Prof. Dr. Edmund Maser, use shells near the old ammunition to investigate the extent to which organisms are directly affected by the chemicals.

“In our study we were able to show that there are still considerable gaps in our knowledge of the global effects of old ammunition on marine ecosystems. In the UDEMM project we are in the process of closing down some of them. But the ultimate goal must be to remove the ammunition at some point. And this is a mammoth task,” stresses co-author Prof. Dr. Eric Achterberg.