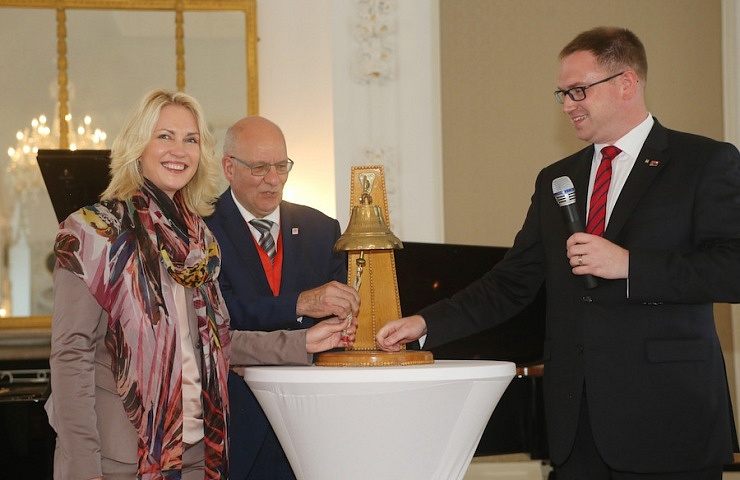 On 21 June at 6 p.m. the 38th International Hanseatic Day Rostock was opened in the Rostock Baroque Hall by the foreman of the Hanse Jan Lindenau, the Prime Minister of Mecklenburg-Vorpommern Manuela Schwesig and the Lord Mayor of the Hanseatic and University City Rostock Roland Methling in the presence of 250 delegates from 119 Hanseatic cities.

However, due to the weather situation, the opening event planned on the stage in the city harbour had to be cancelled and was integrated into the reception of the Lord Mayor of the Hanseatic City of Rostock for the delegates at short notice.
“What would we Hanseats be if the weather could put a spoke in our wheel. Without wind not a single Hanseatic cog would have sailed,” emphasised Jan Lindenau in his opening speech. “The beginning was a surprise and now we are looking forward to three more days full of positive surprises without rain”, said the foreman of the Hanseatic League optimistically. Prime Minister Manuela Schwesig underlined the importance of DIE HANSE: “The Hanseatic League is a good example of international cohesion and proves that it is better to approach one another than to resolve conflicts with one another”.

A total of 119 Hanseatic cities are taking part in the great public festival from 21 to 24 June, which is being celebrated in the Hanseatic city on the occasion of Rostock’s 800th founding anniversary. They present themselves with their art, culture, cuisine and tradition in seven experience areas and on seven stages.

The first highlights of the event, which was marked by a wonderful maritime ambience and great internationality, were the arrival of the museum freighter “Cap San Diego” from Hamburg and the historic merchant ships, which were loaded with freight as before. Further highlights are the NDR summer tour with Philipp Dittberner and Wincent Weiss on Friday, the big ROST(R)OCK concert with laser show and fireworks on Saturday and the colourful procession with around 2,500 participants on Sunday. The Hanseatic Day ends with the handover of the Hanseatic flag to the next host city Pskow.

Every year, the association of cities DIE HANSE celebrates the International Hanseatic Day in one of the 190 member cities. From 21 to 24 June 2018, Rostock has the honour of hosting around 2,000 delegates, cultural workers and market drivers from 115 Hanseatic cities in 16 European countries. With their guests, the people of Rostock celebrate the 800th birthday of the Hanseatic city throughout the city centre. Around 400,000 visitors are expected.